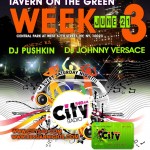 A concert and party put together in 6 hours (with promotions) turned out to be a very rare and special night for IRAKLI fans. The Russian (Georgian) Superstar put on an extended show of his latest 2008 tour. Aside from weather and changes in venues, we still had IRAKLI very upbeat performing his best hits such as “London-Paris”, “Kapli Absenta” and “Ya S’toboy”, as well as new songs, “Sni” and “Tak Ne Bivayet.” From what we were told, Friday’s show at Rasputin does not compare to the wild and extended final U.S. concert last Sunday. As IRAKLI introduced each song, sometimes going off subject, drinking Cognac out of the bottle with shots of Red Bull, he made toasts to his band and his great audience. The minute IRAKLI mentioned he would like a ciggarette, fans would come up to the stage and give him one. One concert goer said he was a big fan of his since the beginning and didn’t want to miss out tonight, after enjoying his sold-out shows last year at Club Duvet and Millennium Theater (brought to you by the Russian Radio Station, City 540am). What was a rushed, last minute event on a holiday and Sunday, turned out to be a fun and a great musical treat. M.F.

Posted in Club Nights |
Collapse all Expand all